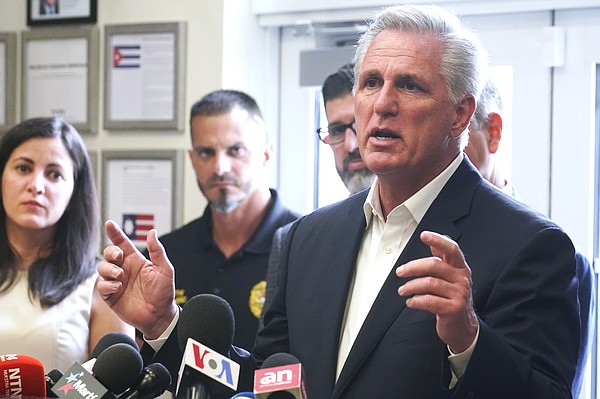 Biden not doing enough to help Cubans access the internet

MIAMI (AP) – Republican House Leader Kevin McCarthy and other GOP politicians on Thursday accused President Joe Biden of failing to do more to help Cubans on the island gain access to the internet.

Internet service was cut at one point during a July 11 protest against the Communist government, but Cuban authorities did not explicitly acknowledge that they had done so. Service is still spotty across the island more than three weeks later.

In a subsequent press conference, Representative Maria Elvira Salazar said that although specific companies have expressed willingness to step in and help, the White House has ignored the Cuban-American delegation. Salazar said “patience is running out”.

Biden said the administration was working to identify options to make the internet more accessible on the island. Internet in Cuba was expensive and relatively scarce until recently. The Cuban government restricts independent news media and censors what is available online. It also disrupts internet access.

Last Friday, Biden announced new sanctions against Cuba’s National Revolutionary Police and its two top officials. The president also created a task force to review the United States’ remittance policy to ensure that the Communist government does not take some of the money Cubans send from the United States to the island. Cuban Foreign Minister Bruno Rodriguez said last month that the government was not taking any of the money.

Former President Donald Trump’s administration has taken more than 200 actions against Cuba, including limiting individual travel to the island from the United States, banning cruise ship visits and capping remittances . Republicans in Miami said Thursday they were against lifting the caps.

US Representative Mario Diaz-Balart said the increase in remittances was “something the regime is asking for.”

Diaz-Balart added that he had participated in previous classified briefings in which several options to improve internet access were presented. He said he could not disclose any details, but such measures had been used in other countries.

Cubans have used the internet to publicize last month’s anti-government protests on social media. Thousands of people have turned out in Havana and other cities to oppose government policies during large protests, unlike any seen in decades.

“Remember why you want to do this,” McCarthy said of improving and maintaining Internet access for Cuban residents. “You want individuals, those in Cuba who crave freedom, to understand that we are with them.”

PROSHARES TRUST II Discussion and analysis by management of the financial position and results of operations. (form 10-Q)