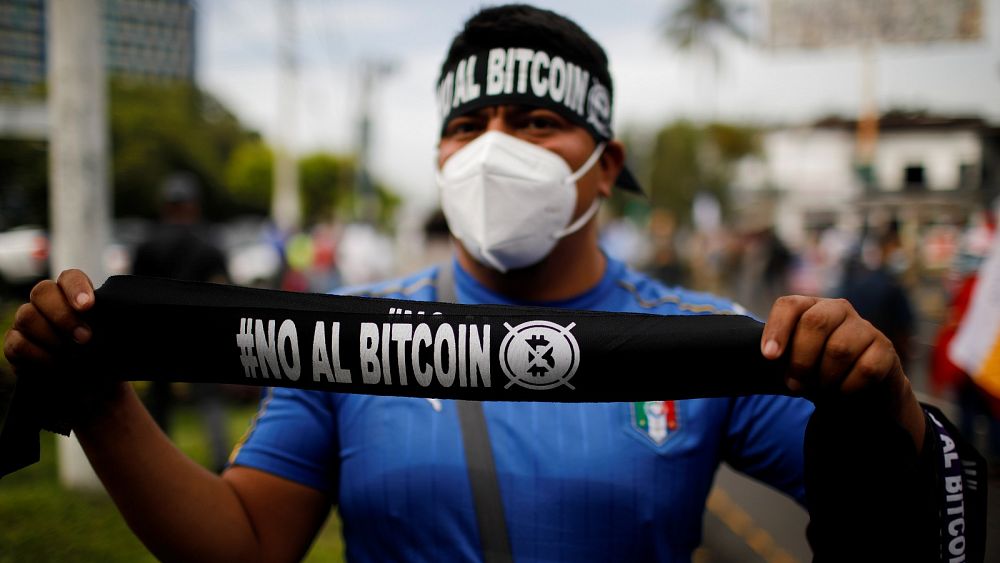 Salvadorans took to the streets on Friday to protest the adoption of Bitcoin as official currency, a move that made waves in June when lawmakers voted to adopt it as legal tender.

The new crypto law would put Bitcoin on par with the US dollar, a move that has been criticized by the International Monetary Fund (IMF).

Hundreds of protesters – including workers, veterans and retirees – marched through the capital San Salvador to voice concerns over the use of cryptocurrency, especially if in the future it was used to pay pensions. and social assistance instead of the US dollar.

Protesters held up signs saying “Bukele, we don’t want bitcoin” and “No to corrupt money laundering”.

“We know that this coin fluctuates considerably. Its value changes every second and we will have no control over it,” Stanley Quinteros, a worker union member at the Supreme Court of Justice, told Reuters.

Neighboring countries in Central America are eagerly awaiting to see if El Salvador’s adoption of Bitcoin as a parallel legal tender reduces the cost of remittances, a major source of income for millions of people, the development bank said. of the region.

But this decision does not officially take effect until September 7.

Bukele introduced the adoption of Bitcoin as a way to facilitate remittances for Salvadorians living abroad.

“Everyone is looking to see if everything is going well for El Salvador and if, for example, the cost of remittances drops considerably (…) other countries will probably seek this advantage and adopt it”, Dante Mossi, president executive of the Central American Bank for Economic Integration (CABEI), told Reuters.

Mossi called the plan an “extraordinary experiment” to increase financial inclusion in a region where many people do not have access to bank accounts or credit cards and depend on remittances – from money sent by relatives living in the United States.

CABEI, the regional development bank, is providing technical assistance to El Salvador for cryptocurrency implementation, a major show of support after the World Bank refused to help, citing environmental drawbacks and transparency.

Mossi said the Central American countries that receive the most remittances are the most likely to favor the use of Bitcoin and stressed that CABEI has a “fiduciary duty” to support El Salvador in its request for aid.

“Guatemala, Honduras, and El Salvador are the countries that stand to gain the most if the adoption of bitcoin lowers the cost of remittances,” Mossi said.

The Central Bank of Honduras referred Reuters to a June 11 statement that the bank does not prohibit, supervise, or guarantee the use of cryptocurrencies as payment methods in the country.

The governments of Guatemala and Honduras did not immediately respond to a request for comment.

According to Autonomous Research, less than 1% of global cross-border remittance volume is currently in crypto, but going forward, crypto is expected to account for a larger share of the more than $ 500 billion (€ 424 billion) for every year. global remittances.

Bitcoin offers, in theory, a fast and inexpensive way to send money across borders without resorting to traditional channels.

The aid is intended to help El Salvador “navigate waters that have yet to be explored,” Sanchez said.

How Afghanistan Changed the Soviet Superpower