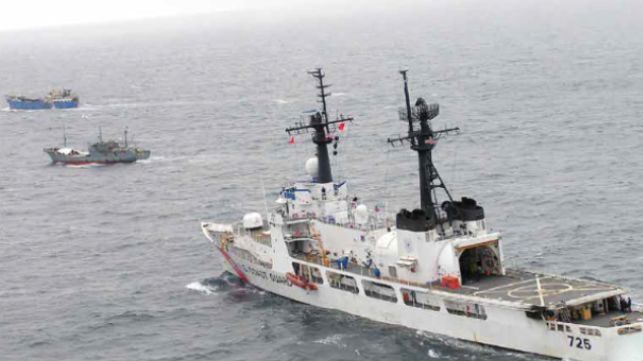 The United Nations uses June 5 of each year to draw public attention to the negative impacts of IUU fishing, which undermines its sustainable development goals of ensuring that fishing can provide food and jobs. This year, questions about sustainability and seafood consumption have surfaced into the mainstream debate following a controversial Netflix documentary, Seaspiracy.

More than a third of the world’s fish stocks are overexploited, that is, taken at a rate where they cannot recover. Illegal activities add even more pressure, degrading the marine environment, making it more difficult to determine the number of fish and harming the prospects of legal fishermen and people in the poorest parts of the world.

What is IUU fishing?

Illegal, unreported and unregulated (IUU) fishing includes any fishing that violates fishing laws and regulations or takes place beyond their reach.

Illegal fishing generally means without a license, in an area where fishing is prohibited, with prohibited gear, in excess of a quota or for protected species. Very often, it is a vessel that enters the waters of a country without a fishing license, or fishes with a license but catches more than is permitted.

Then there is the problem of unreported and underreported catches by licensed vessels seeking to violate quotas or catch prohibited species.

Although most of the world’s fish are caught in the national waters of coastal states – within 200 nautical miles of their coasts – much of the unregulated fishing takes place beyond that on the high seas, which covers nearly of 45% of our planet. Uneven regulation and enforcement in this vast area allows for endemic IUU fishing.

Where does it take place ?

IUU fishing is present everywhere, from shallow coastal or inland waters to the most remote parts of the ocean. It particularly affects countries in the south of the world where fisheries management may be poorly developed or where resources are limited to monitor their waters or enforce regulations. West Africa and the west-central Pacific are assessed as having the highest rates of illegal fishing, followed by the Bering Sea and the southwest Atlantic.

How many fish are caught illegally?

There are no reliable figures on global IUU fishing, but experts estimate that more than one in five (22%) landed fish are caught illegally, with that number rising to one in four off the coast of Africa. Each year, approximately $ 26-50 billion in revenue is lost to IUU fishing.

Why is IUU fishing such a serious threat?

INN contributes to the overexploitation of fish populations, hinders their recovery and damages the marine environment. Thousands of marine species die as bycatch and fragile habitats are destroyed by the unregulated use of harmful practices such as bottom trawling.

IUU fishing negatively affects the well-being of fishing communities, especially in countries of the South, where many people depend on fish for their food and income. It exacerbates poverty and strongly contributes to food insecurity. It also has direct links to organized crime, including human trafficking, drug trafficking and slavery.

Why does IUU fishing exist?

The main driver is money – fishermen pay no taxes or duties on their illegal catches. But IUU fishing only happens because offenders can get away with it. It is more common in countries unable to put in place or enforce effective fishing controls.

One of the main obstacles in the fight against IUU fishing are flags of convenience – flown by foreign fishing vessels to take advantage of minimal regulations, cheap registration fees, low or no taxes and the possibility of employing cheap labor. While this practice is not illegal, the use of a flag of convenience allows IUU fishermen to conceal their operations or avoid international laws designed to conserve marine resources. Thirty-five countries have open registries where an owner does not need to meet nationality or residency requirements. Open registers hide the true owners of a vessel; facilitate tax evasion and deplorable working conditions for seafarers; and are linked to devastating oil spills.

Another common IUU practice is transhipment – where vessels fishing on the high seas for high-value species like tuna unload their catch onto refrigerated transport vessels called “reefers”. The reefers bring food, fuel, bait and labor, and take the catch in the form of boxes of frozen fish. It is technically legal and a cost effective way for ships to stay at sea longer. But since ships do not enter port, it is difficult to determine if the capture is legal.

How to stop IUU fishing?

A number of mechanisms exist or are being negotiated in an attempt to put an end to this damaging black market.

The UN has chosen June 5 as the Day against IUU fishing because it is the anniversary of the entry into force of the Port State Measures Agreement (PSMA) in June 2016 This is the first binding international agreement to prevent illegally caught fish from entering markets through ports. To date, 68 countries plus the European Union are party to the PSMA. China, as the world’s fishing superpower, is the key, and it is hoped that it will ratify it soon.

United Nations Sustainable Development Goal 14, “Life Under Water” calls for an end to harmful subsidies that contribute to overcapacity, overfishing and IUU fishing. The World Trade Organization has been trying to fix this problem for almost 20 years, and last year it missed its 2020 deadline, in part because of COVID-19. But there are signs that a deal may finally be in sight: Nigeria’s new managing director, Ngozi Okonjo-Iweala, has made fisheries subsidies a priority and is convening a ministerial conference in July with the aim of finalizing the agreements. negotiations.

What can consumers do?

Ultimately, IUU fishing is a response to the ever-growing global appetite for seafood. Consumers can play their part alongside international efforts by making informed choices where possible. Look for trust marks such as the international Marine Stewardship Council (MSC) which verifies that your fish has been caught transparently. Or use online resources to find out which cash is best to buy and which to avoid. You can also put pressure on your country’s representatives to reach an ambitious agreement in the WTO subsidy negotiations.

Jessica Aldred is a special projects writer for China Dialogue, focusing on environmental themes of global significance, including the ocean and biodiversity. She spent 10 years as an Associate Environmental Editor at The Guardian and has nearly 20 years of editorial experience for major media organizations in London, Sydney and Melbourne.

This article is courtesy of China Dialogue Ocean and is reproduced here in abridged form. It can be found in its original form here.

The opinions expressed here are those of the author and not necessarily those of The Maritime Executive.

Earth Overshoot Day: Earth will have exhausted its annual resource quota “by July”